Degrees: B. S. in mechanical and aerospace engineering, and M. Eng. In engineering management from Cornell University
Currently working as an Entrepreneur for VERSABALL 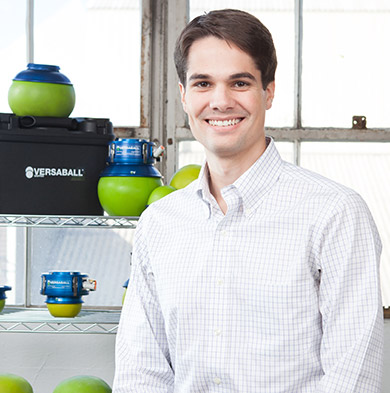 When it comes to entrepreneurship, it’s one thing to come up with a great idea, and yet another to pull together the right group of people to execute it. Enter John Dean ’08, a core member of “Team Empire” at a startup called Empire Robotics. Just over a year ago, the company launched its first product dubbed VERSABALL. And for the past six months, it has been Dean’s job as Product Manager to articulate and communicate what makes this industrial robotic gripper so exciting.

Attached to a robotic arm, the ball-shaped elastic membrane filled with granular material is on the cutting-edge of technology, demonstrating a new trend called “soft robotics.” By manipulating the air pressure inside the ball, VERSABALL easily conforms around objects of all different shapes and sizes –from a light bulb to a smartphone. Its design prevents hurt trapped fingers, providing an optimal choice for safe, collaborative robot applications with humans.

Dean is responsible for all of the marketing, public relations and sales for VERSABALL. “Being a part of a startup has been thrilling. It creates a sense of urgency and gets the competitive juices flowing,” says Dean. “There is never a day that’s the same.” Most recently, Dean has been focusing on public relations for VERSABALL’s appearance at the 2015 Consumer Electronics Show in Las Vegas and on “The Tonight Show Starring Jimmy Fallon.”

With the excitement though comes an immense amount of responsibility. Dean has been tasked with the challenge of selling a brand new technology that’s never been commercialized, primarily to the manufacturing industry. Although he is more involved in the business side of Empire Robotics, his B.S. in mechanical and aerospace engineering and M.Eng. in engineering management from Cornell University play a critical role in his success, giving him the ability to understand the technology behind VERSABALL and work in tandem with the tight knit 8-member team of engineers.

Dean credits St. Sebastian’s with making him well-rounded. “From writing to public speaking, the school gave me a wide set of skills needed for my career and created a confidence that helps when selling the product or speaking to the press.” He recently returned to campus to speak to the Finance Academy about entrepreneurship.

His advice for future Arrows? “Find a job where you’re going to learn something and learn it as fast as possible. And find someone who will let you try and fail and let you try again.”